Defra has announced that new powers will be granted to explore and research gene editing in plants. The British Society of Plant Breeders (BSPB) chief executive Samantha Brooke has welcomed today’s announcement saying:

“New legislation laid before Parliament will simplify requirements for our members to undertake plant-based research and development, using genetic technologies such as gene editing, more easily,”

The rules will apply to plants where gene editing is used to create new varieties similar to those which could have been produced more slowly through traditional breeding processes and will unlock research opportunities to grow crops which are more nutritious, and which require less pesticide use.

“This is an important next step towards anticipated regulatory divergence from the EU rules that classified all gene edited plants as genetically modified organisms (GMOs), even when the variety could have occurred naturally or through conventional breeding methods,” says Ms Brooke.

Existing techniques in advanced gene editing such as CRISPR-Cas9 have shown improvements in the speed and precision of crop breeding. “This has opened up significant opportunities to keep pace with demands for increased agricultural productivity, resource-use efficiency, more durable pest and disease resistance, improved nutrition and resilience to climate change,” she adds.

Current rules inherited from the EU differ from how gene editing techniques are regulated in other parts of the world, such as the United States, Argentina, Brazil, Canada, Australia, and Japan. “Today’s announcement is a small but important step towards more proportionate and enabling regulation, in line with the Government’s pledge to liberate our biosciences sector,” she says.

Harnessing the genetic resources that nature has provided through genetic technologies has the potential to create new opportunities for farmers to grow more resilient crops.

“We look forward to an early announcement from Defra on plans to introduce the new primary legislation needed to deliver on the Government’s commitment, freeing up the genetic innovation to develop more resilient, nutritious and higher-yielding crops with a reduced footprint on the environment,” concludes Ms Brooke. 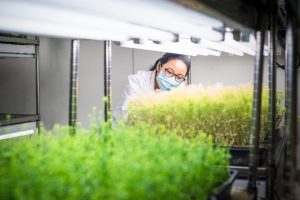